OP Financial Group is the most popular bank in Finland, owned by its 1.9 million members (around 40% of the country’s adult population). They elect the board with one-member-one-vote elections every four years, and the requirement to stand as a candidate in Helsinki, the largest branch, is a signature from only three other members. Voters and candidates can take part in an online election quiz where they answer a series of questions to help match voters with a candidate that most aligns with their views.

Cooperatives are often taught to align less strictly with the cooperative principles as they grow, but this has not been the case with OP. In the last decade it has turned the Helsinki branch into a proper cooperative with one-member-one-vote elections. It also bought the largest Finnish insurance company and converted it from a publicly listed company into a mutual, which is especially exceptional given that in the last 40 years most insurance companies in the world have demutualised.   Not only has it strengthened its cooperative character while experiencing economic expansion, it has also invented new services, two of which are presented below.

OP Group-buying platform enables businesses to sell products to OP members. The more members there are that place an order for a product, the cheaper the price gets for everyone.

The simple yet brilliant idea for the platform was proposed by an ordinary member through an OP online community. It’s perhaps the most straight-forward example of cooperativism - almost like a digital reincarnation of the very first cooperative, Rochdale Society of Equitable Pioneers, where a group of workers pooled their money together to purchase food items in bulk over 150 years ago. 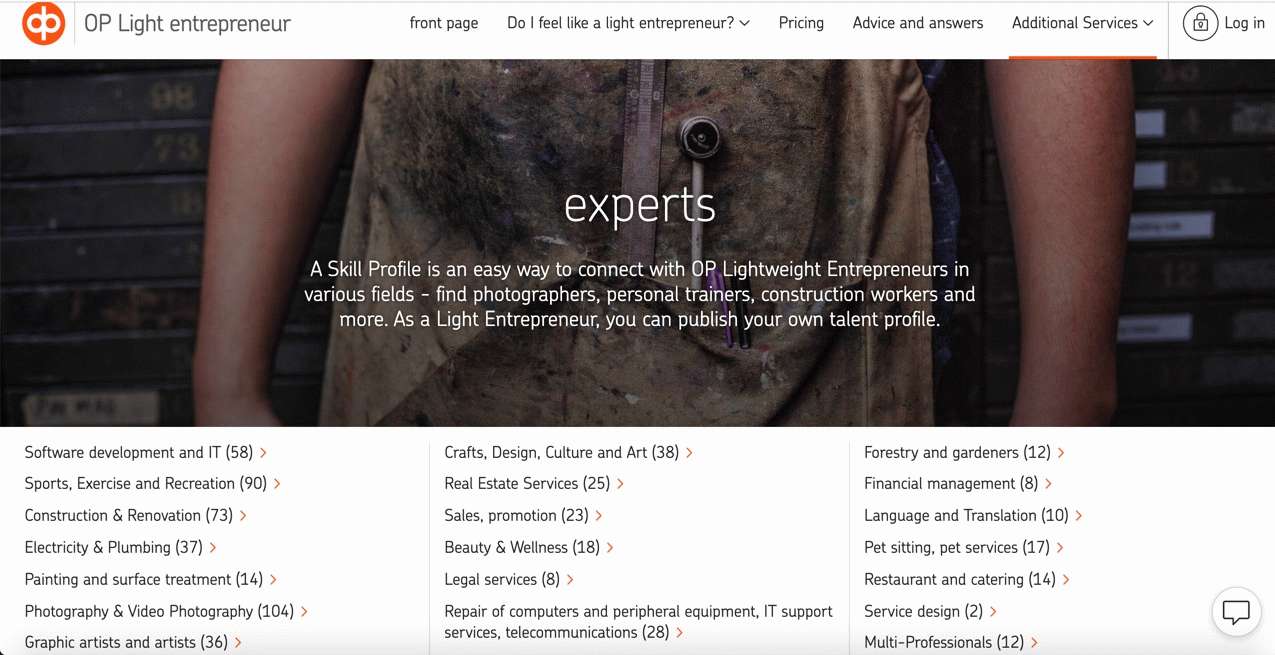 In 2017 the coop launched OP Light Entrepreneur, an invoicing software for the self employed and small businesses. In Finland, businesses can access benefits such as paying zero or reduced VAT for the first 30 000€ made if they register a Business ID. 40% of all Business IDs in Finland are registered through OP Light Entrepreneur software, that is the only invoicing software that does it for free (otherwise it costs 75€). The commission is 5% for the first 30 000€ billed per year. It does the accounting and taxes, allowing the self-employed to focus on their work.

It also provides a marketplace for the light entrepreneurs to offer their services.

Nathan Schneider recently wrote an extremely important article about cooperatives, titled “Co-ops, from Lateral to Vertical and Back Again”. He makes the case that as cooperatives grow, they turn from fostering lateral (member-to-member) to vertical (institution-member) relationships. If there would be one sentence I wish people working in large cooperatives would ponder on, it would no doubt be this from the article, "Co-ops of the near future could find themselves asking less what they can do for their members and more what their members—and potential members—can do for each other.”

So how could a financial cooperative like OP help build lateral relationships? Here is one idea.   There are insurance plans in the US that ensure that if people get hospitalised, there is someone to take care of their pet. Could OP bank offer a similar insurance to its members, and have an online platform where other members could volunteer to look after the pets in exchange for compensation? For example, one member might take such an insurance, and when they are hospitalised for a week, another member would take care of their cat. Perhaps the member taking care of the cat could receive their compensation in a form of discounted insurance for themselves - making the system reciprocal, somewhat similar to time banking.

This might not be a practical idea to implement and it certainly won’t be a billion dollar fintech disruption. I’m not saying this specific idea is what the big coops like OP need to do, but rather that it is this way of thinking, coming up with ideas to build lateral relationships, that is needed.   I will be standing in the OP bank Helsinki branch elections in 2021, and would love to campaign on a series of ideas on how to build lateral relationships between members. If you have any ideas, do not hesitate to comment below or message me on Coop Exchange’s Facebook or Twitter.