Mobile home communities in the US

Approximately 22 million people, or around 6% of the US population, live in mobile home communities, often known as trailer parks. A 2015 report described these communities as “America’s largest single source of unsubsidised affordable homeownership… the de facto source of affordable housing in many of the nation’s most persistent poverty regions and high-cost housing markets.”

While many of the residents are in a less than ideal economic situation, the stereotypes often portray the residents unfairly, as people who are unable to adapt to the society. This is not true; a majority of the households (57%) in these communities have at least one person in full time employment, and the majority of them are retirees. A typical resident of these communities is a teacher or a retired store manager, not involved in criminal activities.

These communities are also seen as increasingly attractive investments by the likes of private equity firms. The Private Equity Stakeholder Project estimates that they provide a reliable annual return of 4% or more, which is double the rate of real estate trust return. These businesses seek to maximise the rent fees while spending the minimum amount possible to maintain the infrastructure. A great cause of distress to the residents is often the rent increases, poor infrastructure and the threat of being priced out. 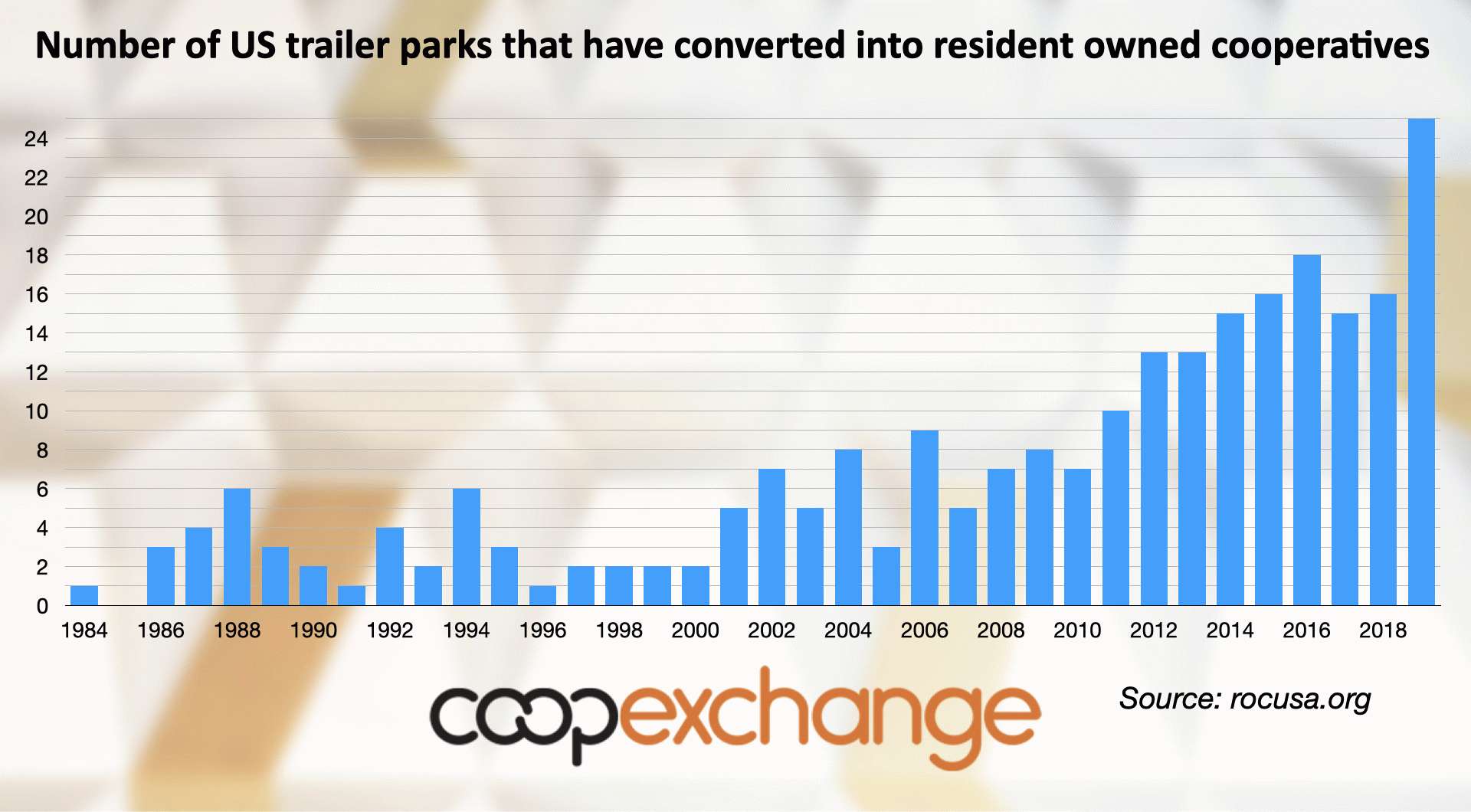 One solution to these problems is community buy-outs, where the residents buy the land and operate the community as a cooperative. The incentives are no longer to maximise the lot fees and minimise the investment on infrastructure, such as water utilities or green areas, but quite the opposite. The residents are also more likely to voluntarily take part in efforts to improve the community. For example, by helping with gardening in common green areas or doing repair works, since they are the owners of the community and reap the benefits in increasing property values. On the other hand, it also requires more responsibility - the board consists of and is elected democratically by the residents themselves. The picture below shows how this model has grown in popularity since the records began.

Research suggests this model works. According to the non-profit Resident Owned Communities, that has helped more than 17,000 owners in manufactured homes in 17 states to do a community buy-out, the resident owned cooperatives see average site fees increase 0.86% per year, compared to the national average of 3.9%. The lot fees on average are $14 cheaper per month, which might underestimate the effectiveness of the model since these communities are more likely to invest in improving and maintaining the communities. None of the community-buy outs have ended up in a foreclose or bankruptcy, despite 75% of buyers being low income households. Research also shows that the cooperative ownership has a positive effect on the residents sense of control and stability.

Often the organising methods of social movements disproportionately attract those who have the luxury of time and resources to help those less fortunate than them. Whilst it is admirable and often valuable, a true transformative change cannot rely on the altruism of those who the system largely works for. It must be based on those who the system is not working for providing solutions through mutual self-help. Webinars about radical theorists can be stimulating and inspiring, but they hardly attract people who have more urgent concerns in life than abstract discussions about the brutality of the economic system they have to endure in reality. This is why organising cooperatives, while requiring more sacrifice and skin in the game, are more effective in attracting those struggling economically. They don’t offer just inspiration and intellectual stimulation; they put money in your pocket and give you power in decisions that affect your life.