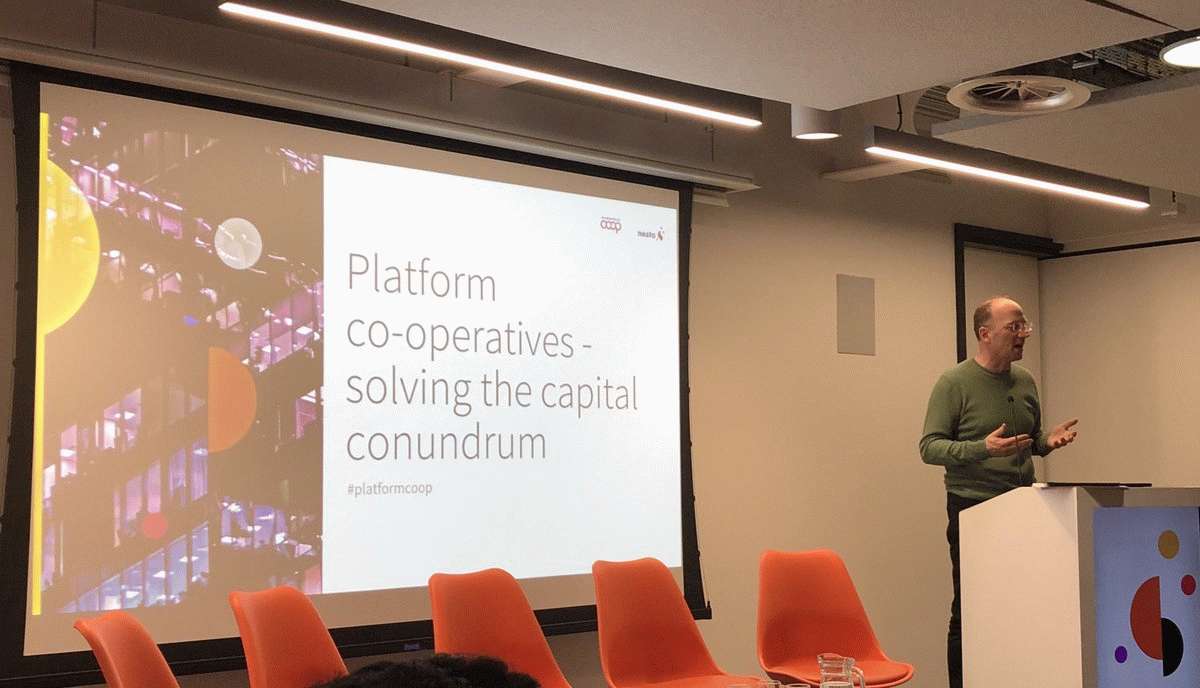 I had the pleasure of attending the NESTA event “Platform Cooperatives And The Capital Conundrum” that celebrated the publication of a report with the same title. The biggest announcement of the report was the launch of a Platform Cooperative Fund with the goal of raising £1,000,000. The fund seeks to attract funding, particularly from institutional social investors, and will provide initial funding for platform cooperatives to get them through the early, pre-trading “valley of death” until they start generating a revenue and raise investment from their users. Once profitable, the platform cooperatives will pay back the investors, perhaps with a small profit, and gather capital from their members from then on. The first platform coop to receive funding will be the Equal Care Coop, which is building a multi-stakeholder social care cooperative owned by both the givers and receivers of care. The panel discussion also included Kat Five from Resonate, a platform coop alternative to Spotify co-owned by musicians and listeners (I'm a member of Resonate and warmly recommend everyone else to join as well).

We are very excited to see the British cooperative movement, the oldest in the world, also spearheading the development of the youngest branch of the movement, that of platform cooperatives.

The Preston Model For Platform Cooperatives - Anchor And Lighthouse Institutions

As open source software makes creating the platforms for platform cooperatives cheaper, the need to attract people to use the platform grows in importance relative to initial funding. I outline two ways that attracting users could be done. The first is through anchor institutions that buy goods and services from the cooperatives. This approach has been applied with success in Preston, where publicly-owned institutions such as hospitals have spent a larger share of their budgets on buying from small, local and cooperatives businesses.

As a hypothetical example of using an anchor institution approach to support a platform cooperative, the National Instutite Of Health could recruit research participants for medical trials using Savvy Cooperative, a platform cooperative owned by participants of medical trials.  If the National Institute Of Health website would display messages for their visitors that would encourage them to take part in a NIH funded study through Savvy Cooperative, they would also be serving as a lighthouse institution. For example, NIH might fund a clinical trial in Boston researching diabetes, and the NIH website would display a message encouraging visitors to take part in the trial through Savvy if they are visiting NIH online content about diabetes and are from Boston.

Alongside public institutions, trade unions and other cooperatives can act as anchor and lighthouse institutions as well. A worker owned cooperative of truck drivers in Finland with 4.5 million currently in turnover was started by truck drivers working for HOK Elanto, a cooperative that is the country’s largest private employer and the largest retailer. This is an example of a large cooperative acting as an anchor institution for a smaller one. National Union of Rail, Maritime and Transport Workers emailing its members to join the RMT credit union is an example of a trade union acting as lighthouse institution.

We believe this will benefit cooperatives with small and low income membership the most, mainly for two reasons:

Not only does Coop Exchange benefit small cooperatives the most, it is structured to benefit small investors as well. There are two main structural reasons for this: