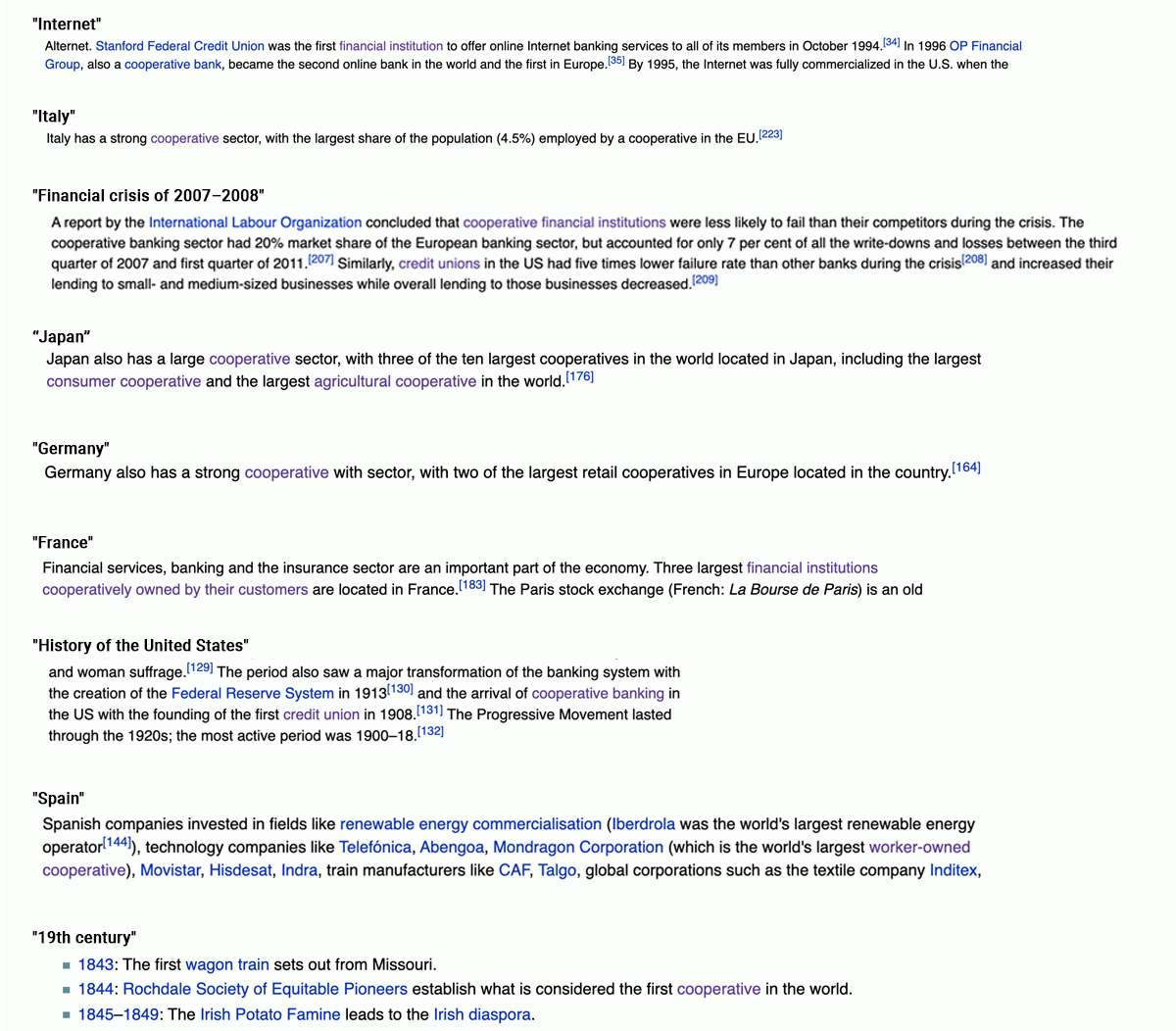 I have added brief mentions of cooperatives to 9 popular Wikipedia articles, ranging from “France” to “The Internet”. Running a marketing campaign where one fact about cooperatives is shared 5 days a week provided a lot of material that was easy to use on Wikipedia. The edits in the picture below took an average of about 20 minutes each, or 3 hours in total, with 32 million annual visits in the articles they have been added to.  However, this approach has a weakness. 7 of the 9 edits are in the top 100 most read Wikipedia articles of all time. There are only a few articles left in the top 100 that would be relevant enough to include a mention about cooperatives. It gradually becomes harder to find as popular articles. As the articles have fewer views, reaching the same amount of views requires editing more articles. If the imperfect criteria of page views is used, the returns on effort are high but diminish quickly.

From reach to depth

As the growth of reach slows, there is move into greater depth.

Those who see a mention and get interested can go more learn more in-depth information, as there is increasing amount of increasingly interlinked relevant articles.  I have written few new articles and chapters about cooperatives, and plan to do so systematically in a way that will enable creation of a template to be added in the bottom of cooperative relevant articles. The template can also be turned into a project in Wikibooks, a sibling project of Wikipedia that enables collaborative creation of text-books. Below is a sketch for a new template, it can be made more comprehensive in a systematic manner by including more articles on regions, purpose and distributing the history into shorter periods, such as decades.

I have started a simple platform cooperative to fund this sort of outreach, which works in the following way:  - Members pay 1$/month to join. - They democratically request and prioritise articles and distribute the money to the members who have created content about coops to Wikipedia.  - Members get a 20$ for writing their first article requested by the coop. I have donated 100$ to the fund to pay for the first 5 members for their first article.   The group is organised through Loomio, a digital tool for group democratic decision making developed by a worker cooperative. The funds are collected through Open Collective, an alternative to Patreon, hosted by Platform6 cooperative.

This does not conflict with Wikipedia rules, as long as every participant displays their membership in their user page and the editing is done in a considerate way.

Research shows that discussion of cooperatives was common in early twentieth century economics textbooks, but is virtually absent from their modern counterparts. This is despite cooperatives playing more important role in the economy than they did in the past. One way to tackle this lack of visibility in text books is making sure that articles in Wikipedia about economics discuss cooperatives.

In 2 years, the goal is to have around 20 members and two donor organisations distributing 100-200$ a month. The new cooperative template has been created.  Wikibooks project has become a comprehensive textbook of the basics of co-operatives, that is regularly and collaboratively improved.

Academic institutions and cooperatives, big and small, use and contribute to educational materials in numerous Wikimedia projects, with the support and encouragement from the wider Wikimedia organisation.  A Wikibooks project is creating a small library of books from “Co-ops And The Anti-Trust”, “Co-operative Economics” to “Cooperatives In Social Care”.

Around 200 membership fee paying members and a dozen of donor organisations distribute a few thousand dollars a month. Most of the money goes to the global south, where it enables a dozen cooperative organisers to focus on organising, due to the extra income earned through their Wikipedia contributions.

If you are interested in joining, click here and join the decision making and discussion in the Loomio.